Skip to content
Breaking News 24 hours a day, 7 days a week.
We do what it takes, to break the news for you! 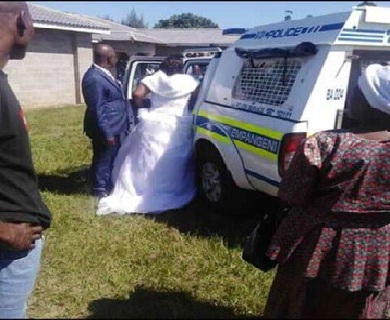 By: Staff Writer
In: South Africa

A love filled wedding day has turned into a nightmare for a South African couple as well as their wedding guests who were arrested on Sunday for contravening coronavirus lock-down regulations.

Love was not the only thing the KwaZulu-Natal bride and groom took a chance on, as they went ahead with their special day despite regulations prohibiting gatherings of more than 50 people.

According to South African Police Service’s national spokesperson Brigadier Vish Naidoo, about 50 people, including the pastor and bridal couple, were arrested in Hlabisa, KwaZulu-Natal, during the ceremony.

They are likely to be charged with the contravention of the regulations of the Disaster Management Act 2002.

In a video of the incident shared on twitter, a bride in a white wedding gown is seen being escorted to a police vehicle by a man in a suit – seemingly her husband – to – be – while their guests look on in shock.

According to eNCA, police received information that a wedding was taking place.

The bridal couple and their guests are currently being processed at the police station and negotiations are taking place, with the prosecutor on the way, Naidoo added.

He said people are still trying to take chances despite the lock-down, but Naidoo stressed the seriousness of the fight against Covid-19.

ADVERTISE WITH US HERE

END_OF_DOCUMENT_TOKEN_TO_BE_REPLACED

Coronavirus crisis could plunge half a billion people into poverty: Oxfam

The fallout from the coronavirus spread that has killed more than 83,000